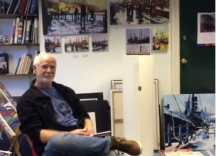 In the last ten years my work has changed and developed with each new project that I have been working on, most of my work has included the human form or feelings either in abstract expressionism or contemporary realism images, I apply acrylic paint with a pallete knife using a vivid array of colours usually applied in many layers giving the paintings a textured appearance.

2013 Trawlers At Rest painting on display at Grimsby Heritage Centre